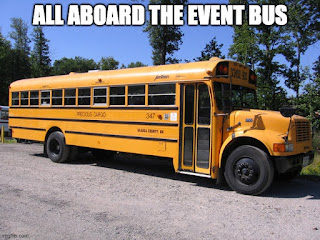 During the Trailblazers Innovate live session on 13th October, Wade Wegner made a comment about modern development being event driven rather than trigger driven, which is an approach I’ve been following for a while now, as in my view it maximises flexibility. Most of us are experiencing event driven development on the client side as we are working more and more with JavaScript, where user interactions generate events. It also applies server side, where platform events can be used to drive automation.

( As an aside, if you google trigger driven development with Salesforce, one of the top hits is an April Fool’s Day post of mine about moving all of your code into triggers and faking record changes to make it run. Don’t do that!)

The trigger approach (and I’m using this term to cover pro/low/no code mechanisms including Apex triggers, process builders, flows, workflow rules) typically means that you (via the Salesforce platform) monitor records and react to specific changes involving those records.

An example of this, loosely based on some of the code behind my toolbox site where I keep details of really useful sites, tools, documents etc, would be to notify me if the number of clicks on an Entry goes up. I can add automation that fires when an Entry record is updated and the clicks field is updated, and sends me the an email to that effect. This works a treat and I’d imagine there are about a billion automations similar to this out in the wild.

The downside to this is the automation is tightly coupled to the data model. If I decided for that I wanted to move the dynamic information out of the Entry and into another object, let’s call it EntryInteraction, my automation has to reflect the change to the data model. I need something that monitors EntryInteraction records and emails me when the clicks field on that changes.

The automation is now decoupled from the data model and knows nothing of the internals of how the application works. As the application author, I don’t need to worry about dependencies on automation, and I can change my data model as I want to reflect my changing needs. A much better situation, I’m sure you will agree.