What Google, Microsoft & Spotify Can Teach Managers About Emotional Intelligence for The Future of Work

“You’re on mute” became the mantra of suddenly virtual. In Hybrid, that will be replaced by, “is ___ coming in today?” On the surface, the question will be innocent, but in a few months, it will represent distrust and misalignment as new constituencies form and alignment declines. How many managers are ready to manage this added emotional complexity?

From Google to Microsoft to Spotify, leaders of big tech are talking about the next revolution in the future of work. After 2020’s “suddenly virtual,” hybrid is the next frontier in the future of work. Like work from home (WFH), it will create new technical obstacles, and even greater relational challenges. Will it be the best of both worlds – or the worst? Emotional intelligence just may be the deciding factor – while new research says the skills leaders need to handle this increasing complexity are declining, here are practical tips to use emotional intelligence to thrive in this new, complex landscape.

“Normal” Isn’t Ever Coming Back: The Future of Work is Disruption

What we know: 2021 will continue the upheaval to the way most people work. Again.

Alphabet CEO Sundar Pichai said in an interview with Time magazine: “We firmly believe that in-person, being together, having a sense of community is super important…. But we do think we need to create more flexibility and more hybrid models.” The question is HOW?Do managers have the needed EQ skills?

What we don’t know: How to manage people effectively in this shifting landscape.

Microsoft’s new research on the topic, from 30k people in 31 countries: “Leaders are out of touch with employees and need a wake-up call.” The key question relationship-centered leaders will be asking: In the face of this change, what do our people need in order to continue creating value?

It’s not just senior leaders on this hybrid path. While managers and employees alike are missing aspects of work, in a recent survey from an app called Blind, over 3,000 employees from over 45 top companies (such as Apple, Twitter, Salesforce, Visa, CapitalOne) found 64% of employees would rather have flexible work than a US$30k increase in salary. Only Cisco, Chase & Qualcomm had a majority opt the other way. This finding speaks to the cost and the emotional burden of a daily commute – and the value of autonomy. But are we ready for that independence?

Starting From Behind: Leaders need to confront the brutal facts of mid 2021

The coming shakeup won’t be all bad, but it will be made harder because of the current reality for most people. Emotionally, people are struggling, and managers aren’t facing this reality. The Microsoft study found that over 60% of front line workers, especially those under 30, are in survival mode. One reason from the report:

We’re more isolated at home as well as at work, “the shift to remote shrunk our networks.” 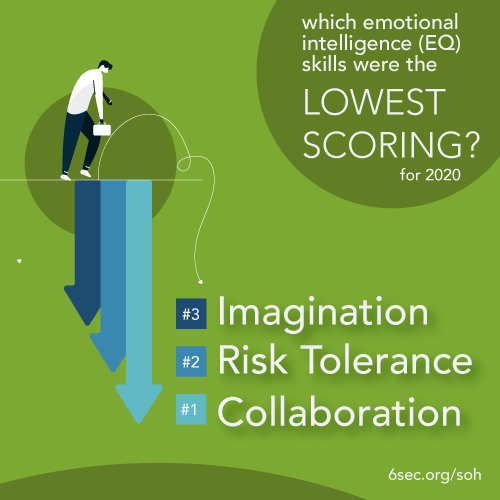 New research from Steelcase with 32k people in 10 countries: Disconnection reduces engagement and productivity. “Loneliness was a growing issue before the pandemic, and this has only accelerated over time.” The 2020 CIGNA Workplace Report found that in the US, 61% of people are lonely – CIGNA’s headline: “Loneliness is at Epidemic Levels in America.”

The antidote to this disconnection is healthy relationships. “People feeling part of a community is a top predictor of higher scores in productivity, engagement, innovation and commitment,” says the Steelcase report. Anna Lundström – VP HR, Americas & Alexander Westerdahl HRBP/ VP, HR at Spotify wrote, “A flexible working culture is built on trust, communication, collaboration, and connection…”

As Salesforce’s chief people officer, Brent Hyder, wrote about the coming hybrid changes: “As employers, we have an opportunity to create an even better workplace – one that allows us to be more connected to each other, find more balance between work and home, and advance equality – ultimately leading to increased innovation and better business outcomes.”

What are the skills that “allow us to be more connected to each other”? Research on behaviors linked to emotional intelligence (EQ) found a set of key EQ talents. One is Collaboration, defined as: “Creating harmony between people.” Sadly, the 2021 State of the Heart research – the world’s largest study of emotional intelligence – finds that collaboration declined 13% since 2014. It’s among the most-needed capabilities for increasing connectedness, but it’s the lowest-scoring Brain Talent in the latest global sample. 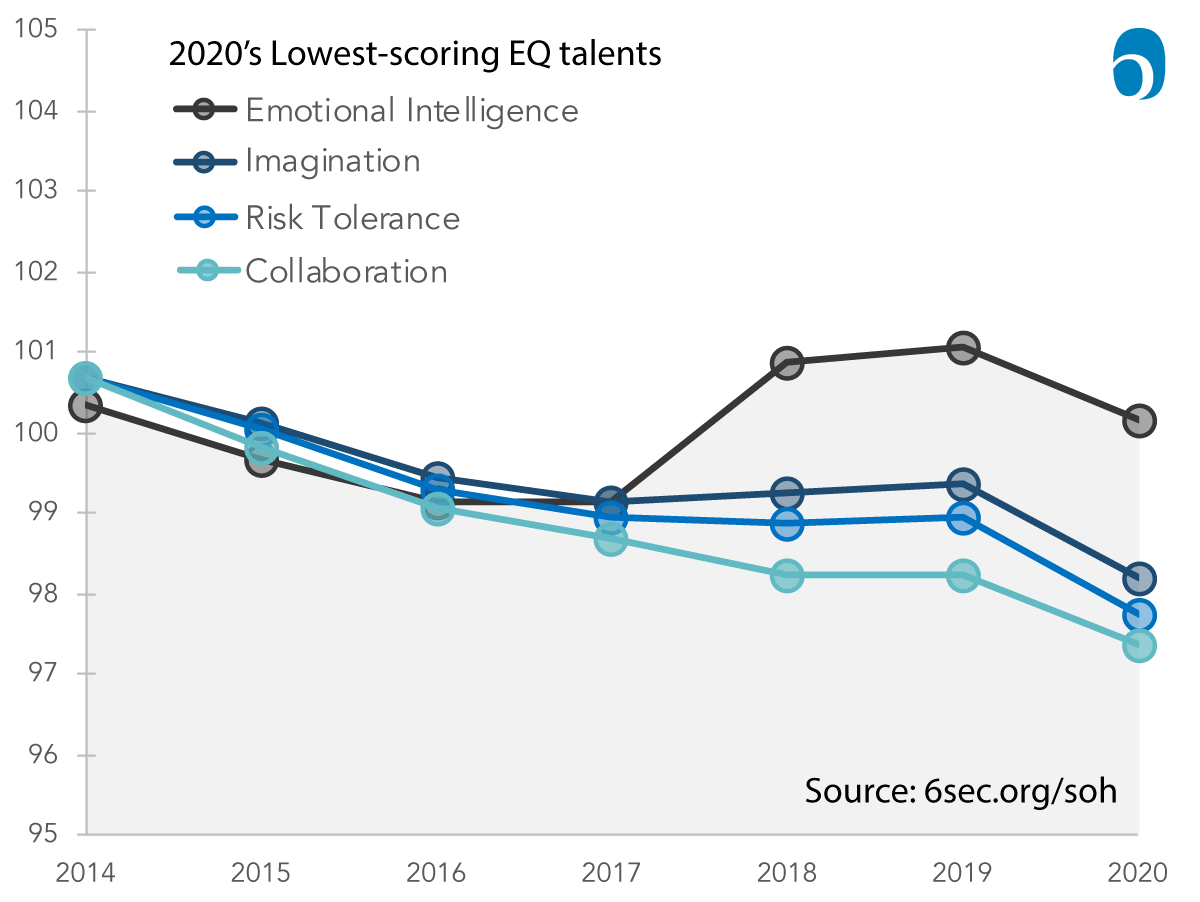 The overall decline in emotional intelligence is alarming, but as the graph shows, prior to the pandemic the story was improving. This analysis from the State of the Heart study is based on a randomized global sample; starting from a pool of 127,645 people then extracting a sample of 20,160 people from 129 countries, balanced by global region, age, gender. The sample includes other categories such as job role, industry, division, and more. Past reports are available from 6sec.org/soh and for the rest of this year we’ll be sharing new findings – subscribe here to be notified of each new release.

Hybrid Strategies from the EQ Network

Six Seconds is a global community; as we’ve grown, our team has been increasingly distributed, since we grew to over 10 people, our full staff has never been in a room together all at once… so we’ve been a hybrid org for 20 years. We’ve had many issues of misalignment, some people being in a room and others missing the conversation that happened there, and a constant process of building connection. Three recommendations from this experience:

Practice Adaptability.
We’ve adopted some of the agile principles to support our virtual work, including maintaining a flat structure. This lack of hierarchy creates certain challenges, but in a hybrid work environment, it allows more autonomy; our team members are used to adapting and collaborating with whoever is in the room.

Decentralize Power.
In many orgs there is a kind of gravity well surrounding the HQ. Power stays there. As an org committed to a global community, we’ve deliberately said the leaders of Six Seconds are distributed. While my office is in Santa Cruz CA, we don’t have a big team here, and (except in the pandemic) I spent more time in our offices around the world than here.

Share How.
When we first developed our “learning philosophy,” it was a kind of checklist to help us in learning design; since we’re an organization all about learning, these principles have become central. Every person at Six Seconds knows the six principles and we use them in our day-to-day conversation. So irrespective of where someone works, or the team-configuration-of-the-moment, there is a shared guide that helps us pay attention to how we do what we do. You’ll hear us joking about them, using them to question decisions, and to guide us in maintain consistency across the virtual landscape.

Of course, no checklist will provide the real answer to a healthy hybrid work culture: This isn’t an issue of “the right system” – it’s an issue of relationships and people skills. That’s why emotional intelligence is essential

Tired, Stressed and Isolated: The Downward Spiral for Performance

The biggest risk to Hybrid is a downward spiral where disconnection, overwhelm, and stress fuel one another. As people become more distressed, there’s a neurobiological nudge to connect to get support, but in a context of low trust, people will isolate instead. That disconnection effect is shown in the Steelcase research mentioned above. In turn, the disconnection leads people to feel even more overwhelmed due to a lack of support.

Business leaders often consider stress as a necessary evil or peripheral factor that can be ignored – but in the upcoming changes, it will prove to be central to Hybrid failure. One of the Brain Talents tied to this issue is Risk Tolerance – it’s one of the trio with the greatest decline, dropping 11% globally since 2014. Risk Tolerance means “accepting the unknown potential,” and, according to the Brain Talent Profile, “to handle complexity, you focus on the future potential and take charge of your emotional energy.” The decline in this talent means people are entering this next stage of work in a compromised state, less able to handle complexity, which will make adaptation incredibly difficult.

Stress is a rising risk, and Joblist’s new findings also show a significant issue around trust: “Nearly 75% of nonmanagers said they experienced moderate or high stress due to work…” and nonmanagers had twice the rate of severe stress. “Over 47% of people said they’re afraid of negative consequences, such as being denied a raise or promotion, if they talk about their stress at work. This fear was more prevalent among women than men.”

This may be correlated with the 10% decline on global scores on the Imagination talent (also since 2014). This is an extremely problematic combination. Just when we need people to boldly step into the unknown, we have record-low scores on these three key talents. Imagine if these three talents were increasing instead… we could use them to:

Risk Tolerance → maintain equilibrium in the current chaos, so we can…

Imagination → envision what’s beyond our current view, then…

Collaboration → build connection to support one another as we move into that future together. 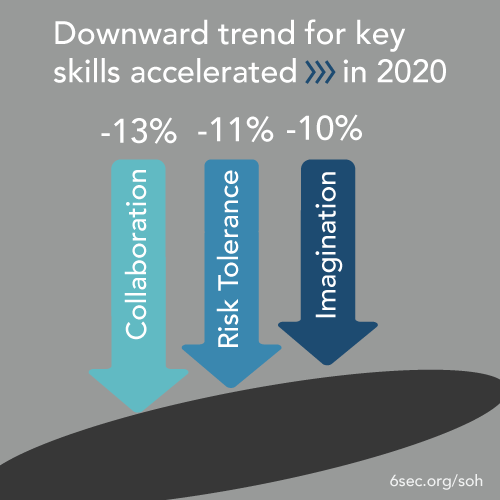 Sid Sijbrandij, CEO of GitLab, says hybrid is the worst of both worlds. He wrote, “remote employees won’t feel included and will have a more challenging time communicating than their peers who report to the office.” The real challenge, he points out, is the uneven playing field of the hybrid model.

Have you ever been in a meeting where some people were present in the room, and some were remote? Those in the room get more influence simply because their voices are easier to hear. There’s power in being “in the room where it happens.” As Sijbrandij points out, for most companies, senior leaders will be at headquarters – and no matter what the written policy says, an imbalance in trust and power will arise.

Unlike the sudden changes of March 2020, we have a little time to prepare for the next wave of change – but it’s coming fast. Many companies are lagging behind, still reeling from the blows of 2020, still trying to “shelter in place” against the chaos of the changes ahead, they’re waiting to see what happens. Meanwhile, future-focused leaders are already starting to address these challenges. There’s an increasing demand for coaching, particularly EQ Coaching which focuses on building capacity to handle the emotional complexity of the new world of work.

Please click here to read the original article as posted on Six Seconds.