Salesforce was in the news this week after reports that the company was looking to acquire enterprise chat firm Slack Technologies.

The company releases Q3 earnings this week and this investment thesis is geared at showing that Salesforce is overvalued at the present moment.

A closer look at the Slack deal

The Wall Street Journal has reported that the Salesforce ( CRM) deal for Slack ( WORK) is imminent and could be tied up early in the week. The deal would value Slack somewhere around the current market cap of $22 billion and would mark the largest acquisition ever by Salesforce.

The deal isn’t a cheap one for investors with Slack currently valued at 28x sales, while its revenues were only up 11 and 7% in the two quarters since January, despite a rally in ‘work from home’ and enterprise tools. Sales are based on seat sales per customer and the company has struggled through downsizing in the industry as a result of the lockdowns.

For Salesforce, the Slack acquisition is more about challenging Microsoft ( MSFT). Last year saw Salesforce integrating the Slack app and more recently, the company released a similar app for Microsoft Teams, so it’s clear that the company wants to gain more control over their app and it will also provide some leverage against Microsoft.

Salesforce previously said that Teams was not a competitor but growth in the platform to 115 million users, from 75 million in April, has obviously changed their mind.

With the rise of Zoom and other video-based platforms, a messenger app still has its drawbacks. Slack CEO Stewart Butterfield said in the company’s Q1 earnings release:

You just can’t adopt Slack that quickly. You can’t move from e-mail to channel-based messaging in that short amount of time. I wish that whole cultures could change overnight.

Slack saw revenues of $640m for FY2020 but costs were $1.2bn and this led to operating income of -588m so the acquisition may not be straight-forward for adding revenues. Salesforce will maybe have to bundle Slack in order to compete with Microsoft so that clouds the revenue picture further.

Salesforce will release their third-quarter earnings this week on December 1st. Full-year fiscal 2021 revenue is expected to rise 21% to $20.77 billion, with FY22 expected to show a 17% rise.

The company outperformed on earnings per share in the last quarter but the problem for investors is that revenues are growing at 27% annually, while expenses are growing at the same pace, so the big picture is being masked by short-term returns.

Research and development costs are soaking up a large part of the company’s finances and this can be factored in, but it’s still worth thinking about how much we want to pay as a sales multiple. This year has seen a boost for ‘work from home’ and enterprise tools but with a vaccine on the horizon and the potential for higher corporate taxes, the walls might be closing in on Salesforce.

The company saw a beat on earnings per share in the second quarter but this was boosted by “realized and unrealized gains… notably due to the nCino IPO.”

The Q2 release went further to clarify the effect of this earnings boost, saying:

These mark-to-market adjustments benefited GAAP EPS by approximately $0.55 and non-GAAP EPS by approximately $0.58. GAAP EPS was also benefited by $2.17 as the company changed its international corporate structure which included a consolidation of certain intangible properties resulting in a $2 billion net tax benefit related to foreign deferred taxes.

Revenues have stagnated on a quarterly basis for Salesforce and net income could revert back to the April and January earnings where net income was $99m and -$248m. 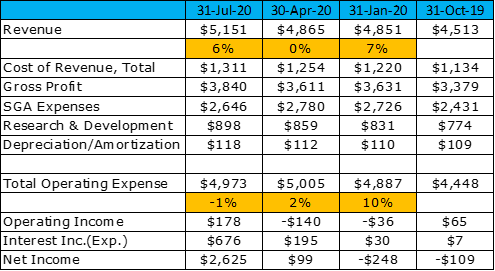 One highlight for the company was the highest-ever operating margin at over 20%. Cash generated from operations for Q2 was $0.43 billion, which was a decrease of 2% year-on-year. Total cash and marketable securities ended the second quarter at $9.28 billion. The company has said that it is looking at an all-cash deal for slack, rather than giving up stock.

Valuations are weighty but in-line with peers

Salesforce stock has been under pressure since the 1st September high at $284.50, which was also a high in the Nasdaq. The stock currently trades at $247.63 with a market cap of $231 billion.

Investors are currently paying for a P/E of 634 and a forward P/E of 66x. This could be lowered via the R&D costs so it is not too much of a problem on the forward number but the stock is currently valued at 11.9x sales which is an issue. Microsoft is also valued at 11x sales, so it is really the effect of a rising Nasdaq. Investors need to decide whether the Nasdaq can hold its lofty valuations when a vaccine rolls out and we see a potential rotation back to physical offices. Salesforce is seeing steady growth in revenues but this is being matched by rising costs and may not be enticing for investors at this price. If we extrapolate revenues at 27% to 2024, we would get $44 billion and the company would still be trading at 5x sales based on the current market cap. The integration of Slack’s loss-making messenger could also impact the company and Salesforce is unlikely to see immediate revenue from the deal.

Salesforce trades at an overweight valuation due to the performance of the Nasdaq and technology stocks this year but the recent emergence of vaccine candidates could impact this rally.

The company is seeing a 27% growth per year on revenues but costs are matching that rise so there is pressure to match their current sales multiples. The company outperformed expectations in second-quarter earnings per share but this was based on one-off items and the third-quarter will revert to the previous trend. The acquisition of Slack will also complicate the near-term financials for Salesforce. Slack saw operating income at -$600m in the latest fiscal year and the company has struggled in the virus backdrop as companies downsized their headcount and spending. There is also the potential that the acquisition could cost more than the current market cap for Slack.

I wouldn’t be excited about owning Salesforce at these valuations and investors should be wary of a post-earnings pullback.

Disclosure: I/we have no positions in any stocks mentioned, and no plans to initiate any positions within the next 72 hours. I wrote this article myself, and it expresses my own opinions. I am not receiving compensation for it (other than from Seeking Alpha). I have no business relationship with any company whose stock is mentioned in this article.

Please click here to read the original article as posted on Seeking Alpha.